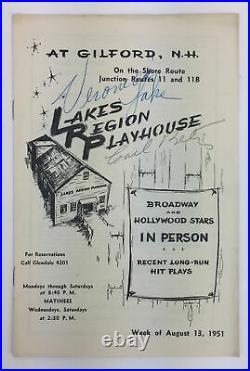 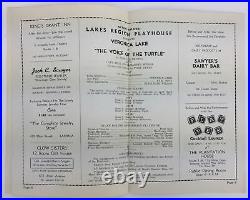 "The Voice of the Turtle" - Signed Program from her First Stage Role. Signed program from the American actress of screen and stage, particularly known for her femme fatale roles. She starred with Carl Betz in John Van Druten's play The Voice of the Turtle at the Lakes Region Playhouse in New Hampshire in August 1951. Both Lake and Bet have signed boldly on the cover of the program. Light toning and edge wear; overall fine. 6 x 9 inches (15.2 x 23 cm). Lake starred in film noir movies of the the 1940's, where she was known for her long blonde peek-a-boo hairstyle. By the late 1940's, her career had begun to decline, partly because of her alcoholism. By 1951 she had left Paramount Pictures, bankrupt and on the verge of a nervous breakdown. Her summer stock appearance in The Voice of the Turtle was her first stage role, but a career in theatre never took off; she disappeared further into obscurity in the 1950's. From the collection of Paul McMahon, a critic, photographer and artist who worked for more than 13 years touring with Marlene Dietrich as the icons stage manager, announcer, dresser, secretary and escort, and later spent 25 years as an arts and entertainment reviewer and photographer with Gay Community News, Esplanade, Tommys Connection, The Mirror, Bay Windows and other publications. ALL AUTOGRAPHS GUARANTEED AUTHENTIC WITHOUT LIMIT. Schubertiade Music & Arts are also members in good standing of ABAA/ILAB , the most exclusive consortium of Rare Book and Manuscript Dealers in the world, as well as the MLA (Music Librarian Association), and MARIAB (Massachusetts and Rhode Island Antiquarian Booksellers). SCHUBERTIADE MUSIC & ARTS deals in Music, Entertainment, Literary and other Autographs, Antiquarian Music, Books, Prints, Photographs & Paintings and Ephemera. Please read more about us in our "about me" page by clicking next to our username / feedback listing. And is so stated on the signed and detailed receipt which comes with every item.

The item "Veronica LAKE & Carl BETZ (Film/Stage) Signed Program from her First Stage Role" is in sale since Friday, October 11, 2019. This item is in the category "Entertainment Memorabilia\Autographs-Original\Theater". The seller is "schubertiade_music_and_arts" and is located in Newtonville, Massachusetts.