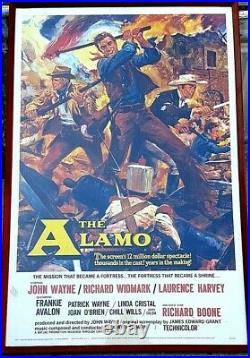 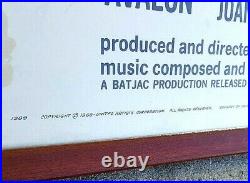 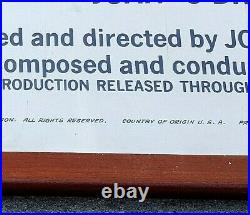 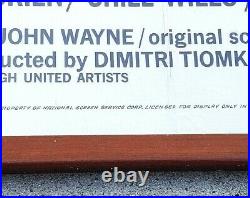 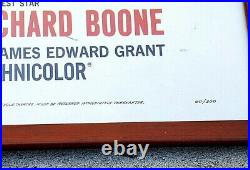 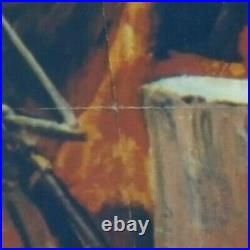 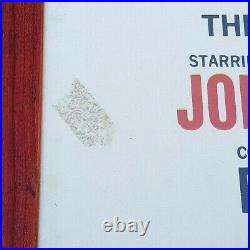 "THE ALAMO" 1960 San Antonio premier movie poster from the WOODLAWN THEATER. This is a Original poster that was posted at the Woodlawn Theater in San Antonio Texas to announce the premier of the movie "The Alamo" Starring John Wayne / Richard Widmark / Laurence Harvey. This poster is nicely mounted and put in a sealed back Cherry wood colored frame. The original four folds can be still be seen, one running center-line vertical, and three running horizontal through the poster.

This poster is the proper dimensions for those printed at the time, 27 by 41 inches. 60/300 in the lower right corner. The colors are still very vibrant, there are no signs of fading or discoloration.

The only visible flaw is the trace of some adhesive left behind by a piece of tape, Probably from when it was originally posted in one of the theaters poster frames. Excerpt from the San Antonio Express.

Pictures of Wayne, known affectionately worldwide as The Duke, ran on the front page of the San Antonio Express for five days in a row, starting with a pen and ink drawing on Oct. The paper suggested the airport would resemble Grand Central Station that day, a Saturday, as movie stars, visiting bigwigs, and newspaper folk from throughout the country come winging in. Monday was another full day, even though it rained throughout the day. A tribute to the Alamo heroes was held in the morning, but an Alamo Heroes Parade that had been scheduled for downtown that afternoon was canceled. The rain couldnt stop a large contingent of trail riders who arrived from the movie set north of Brackettville, more than 100 miles away, from starting a parade of their own. The rain continued at the premiere at the Woodlawn Theatre, but as a front page headline stated the following day: Showers fail to wash away premiere glamour. Wayne arrived about 8:20 p.

And thanked the crowd for turning out in the bad weather. In his review of the film, Warren Darby acquiesced that the story of the Alamo had been told many times, but it probably has not been told so dramatically and vividly and with such impact.

He concluded, If audience reaction at Monday nights premiere is any criterion, it has been a brilliantly successful venture. Provenance can be given by request. If you are a fan of John Wayne (The Duke), or old Hollywood epic westerns, if you are collector of the bygone era of glamorous Hollywood block buster movies, and premiers of old, this poster will be a be a treasured addition to your gallery, or collection.

The item "THE ALAMO 1960 SAN ANTONIO PREMIER MOVIE POSTER FROM THE WOODLAWN THEATER" is in sale since Saturday, June 15, 2019. This item is in the category "Collectibles\Autographs\Movies".

The seller is "gimbler" and is located in El Segundo, California. This item can be shipped worldwide.