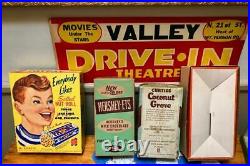 WHAT YOU SEE AND WHAT I DESCRIBE IS WHAT YOU GET AND YOU MUST BE HAPPY! LETS GO OUT TO THE LOBBY.... AND GET OURSELVES SOME TREATS!

SUPER RARE LOT OF ONE POSTER AND 4 EMPTY CANDY BOXES FROM A DRIVE-IN CONCESSION STAND YOU GET THE "MOVIES UNDER THE STARS" VALLEY DRIVE-IN THEATRE POSTER AND A GORGEOUS PAYDAY SALTED NUT-FILLED BOX AND A CURTISS COCONUT GROVE BOX AND A MACKINTOSH TOFFEE CRISP BOX AND A HERSHEYS HERSHY-ETS BOX.. PERFECT FOR YOUR DRIVE-IN MOVOE THEATRE SHRINE! ALL VINTAGE ORIGINAL DRIVE-IN MOVIE THEATRE ITEMS! SUPER FINE RARE THIS IS ONE OF THE NICEST LOTS I HAVE EVER COME ACCROSS!

VERY RARE AND VERY COOL! THIS IS AN ARTICLE I WROTE FOR "SCARY MONSTERS" MAGAZINE ABOUT GHOSTMASTER JACK BAKER... A unique brand of entertainment in American Movie House history was known as the Midnight Ghost Show. From its rise in the late 1920s to its eventual demise in the late 60s, the Spook Show captured imaginations and thrilled audiences in movie houses and drive-ins around the country. Midnight Ghost Shows or Spook Shows, later called Midnight Horror Shows, were orchestrated by a magician or Spook Master, and occurred live in the theatre before, between and after feature horror films.

Spook Show operators would take their shows on the road to small theaters across the country. Thousands of dollars could easily be made with a good routine and the willingness to live a somewhat transient existence. Because the shows typically began at midnight, when the theater would otherwise be closed, the theater owners risked nothing by booking them and were all but guaranteed a profit. Elaborate advertising and posters were provided way in advance by the Spook Show operators, who mailed them to the theater with instructions about how to build up interest and suspense in their patrons.

Intriguing posters often bearing shocking claims were placed in the movie house lobbies weeks before the show rolled into town for its one- night- stand. Trailers for these events were shown with the feature films in the weeks leading up to the Spook Show, generating intense interest and advance tickets sales. Gimmicks such as give-aways and free passes were employed to great success, as was radio advertising. Advertising included such blurbs as, SO SCARY WE DARE YOU TO SIT THROUGH IT ALL!

IF YOU DO---YOU WIN FREE 2 FOR 1 PASSES TO A NEAR FUTURE MOVIE! Another promised, MONSTERS AND WEIRD BEAUTIES. Or from the Ahmen Ra and His Weird Tomb of Terrors featuring the Mummy in Person, MONSTERS GRAB GIRLS FROM THE AUDIENCE!

The Spook Show phenomena began in the lavish theaters of the 1920s where they were billed predominantly as midnight Magic Shows complete with magicians, seances, floating phantoms, illuminated spirits and often comedy as well. One of the unique aspects of these shows was the blackout where at the end of the show the theater lights would be turned off and glow-in-the-dark ghosts would appear to materialize overhead and on the stage, thrilling and terrifying audiences. Everything and anything could happen. Spiders would fly from the balcony, James Dean, Marilyn Monroe or Elvis Presley might materialize, if you were brave enough to sit through the whole show you might win a dead body. Then the feature film, generally a horror film, would be shown.

Some would consider one man to be the king of the Spook Show Circuit- Jack Baker. John Kessler, later known as Jack Baker, was born in Detroit Michigan in 1914. He started his career in show business as a teenager, doing magic.

He later went on to sell trade magazines and in his travels he was invited to a Midnight Ghost Show. When the mentalist, Mel-Roy didnt show, Jack was tapped to do his magic act for the expectant audience. In time young Kessler joined up with Wyman Baker. Adopted by Bakers parents, (thus the change from Kessler to Baker) the two brothers teamed up to create Dr. Silkinis Spiritualistic Séance and Ghost Show in 1938: what would become the long-standing, Asylum of Horrors.

The advertising for the Asylum of Horrors promised Monsters and Fright but leaned towards a Hellsapoppin type show, replete with laughs as well as shrieks. Typical Baker poster advertisement ballyhoo for the Asylum of Horrors Show consisted of blurbs such as: Eerie! See it Happen-right before your startled eyes- IN PERSON! DIRECT FROM HOLLYWOODTHE FRANKENSTEIN MONSTER. The show was a big hit. In fact it broke box office records. Over the years, real movie actors from Universal Films such as Glenn Strange, Bela Lugosi and Lon Chaney Jr. Made guest appearances in Jacks show. Universal even gave Baker special permission to use their Frankenstein character in the show because they felt that it contributed to the popularity of their monster. At one point there were 7 units like franchises, doing the show around the country. For many years Asylum of Horrors was the most successful and lucrative Spook Show on the circuit and Jack Baker became known as the King of the Spook Shows. The decline of Spook Shows had many causes; greed for profit, jaded audiences, television and cinemascope, resulting in the removal of stages from movie theaters. But perhaps there was more. In the advent of Abbott and Costello meeting all the monsters, the Addams Family and The Munsters, there was a saturation of comedy into horror that spelled doom for the whole shebang. Or perhaps too, the world was growing up, becoming more cynical, unwilling to suspend their disbelief even for a few short hours, when the Magic could happen. HERE'S WHAT THE CUSTOMERS ARE SAYING!! Wasn't beauty killed the beast.... ED IS THE ULTIMATE SPOOK SHOW HISTORIAN AND COLLECTOR cinemanure. Poster is in beautiful condition, thank you! Excellent hinton1000 Unusual items, extremely low price, very happy with deal buy4jim EXCELLENT!!! Honest and pleasant ebayer, truly one of the best!! Rods-n-bods Thanks Ed & thanks for the bonus card! POSTER/FLYER WILL BE SENT FLAT SECURELY.

ANY QUESTIONS OR MORE PICS PLEASE JUST ASK. SENT FLAT FULLY PACKED TO THE WINNER! FREE ANYWHERE IN THE U.

FOR WHAT IT TAKES HERE IN THE U. I WILL BE AUCTIONING OFF SOME ONE OF A KIND RARE SPOOK SHOW ITEMS, VINTAGE COMIC BOOKS, SCI FI AND HORROR SEXPLOITATION ORIGINAL MOVIE POSTERS, 8MM FILMS, NON SPORTS TRADING CARD WAX PACKS, KING KONG, VINTAGE MENS STAG MAGAZINES, DVD'S, VIDEOS, AND MORE IN THE UPCOMING WEEKS SO STAY TUNED, AND CHECK OUT OUR MANY OTHER FINE STUFF!!!