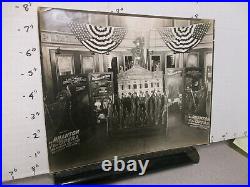 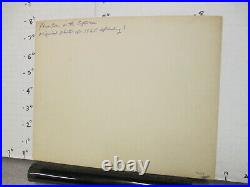 PHANTOM OF THE OPERA 1925 Lon Chaney movie theater lobby display photo standee. Astounding shot of a theater lobby for the original 1925 release of the Lon Chaney Phantom of the Opera , shows numerous elaborate displays some of which may have been custom made by the theater itself.......

2 large figural standees (far left and far right), a burning Paris Opera house with a mob and the Phantom on the roof (center--this appears to be at least 3 or 4 parts), a 4 panel backdrop with 2 panels containing 6 scenes (some from lobby cards but others that are not so this might have been jumbo lobby cards or some special issue) and 2 panels with large single scenes. Each panel has movie info and title lettering at the top. If any of these were done locally by the theater itself, they are absolutely outstanding works of art.

NOTE--no one I have shown this photo to has ever seen this image, I assume it is not a Universal Studio issue shot and was taken by this particular theater. One of the best theater lobby display scenes I have ever seen! ITEM FOR SALE IN THIS LISTING : one photo , original to the era/date listed in the title. SIZE -- 8" x 10" (see ruler in photo) CONDITION -- Fine condition with minor overall wear, has writing on back in ink indicating the 1925 opening. I can do this but ONLY If you follow the below instructions.

MY PHOTOS - If more than 1 item is shown in a photo--- then items are in SEPARATE listings (unless otherwise stated)! West Coast may be significantly higher on larger or heavier items.

FYI here is what the US Post Office currently charges. Offered by DAVID WELCH ------ author of COLLECTING PEZ 1995 and Pictorial Guide to Plastic Candy Dispensers 1991. I have been a full time antique and collectibles dealer since 1989 and have been collecting since the early 1970s. If you have questions about any negatives I have received, feel free to ask. Powered by SixBit's eCommerce Solution.

The item "PHANTOM OF THE OPERA 1925 Lon Chaney movie theater lobby display photo standee" is in sale since Wednesday, May 5, 2021. This item is in the category "Entertainment Memorabilia\Movie Memorabilia\Photographs\Pre-1940\Black & White". The seller is "pezdudewelch" and is located in Wentzville, Missouri. This item can be shipped worldwide.