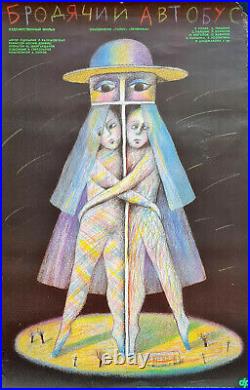 ROLLED, TOP RIGHT CORNER CREASING. Original official Soviet unusual art poster for the film: " NOMAD BUS " - Russian Soviet full-length color feature film, directed at the Lenfilm Film Studio at the Voice Creative Association in 1989 by director Yosyp Heifitsy. The film premiered in the USSR in August 1990. The film tells about the artists of one theater. This is a wandering troupe that travels on their old, almost wrecked bus from one settlement to another to show the audience some of their performances.

MAYSTROVSKY IGOR MARKOVICH (1950 - 2015) - Soviet and Russian graphic artist, illustrator, poster artist. 1973 Graduated from the Moscow School of Industrial Art (Stroganov). He was engaged in graphic design and illustration of books. 1976 Member of the Association of Graphic Artists.

In 2001, an exhibition of film posters by Maistrovsky, Chantsev, Boxer was held in the city of Tavira (Portugal). Died in Canada, after a 15-year struggle with Leukemia, a month before his 65th birthday, suddenly from a heart failure. Maistrovsky was seriously engaged in painting and easel graphics. And his posters grew out of this, being both pictorial and graphic. He was spellbound with pastel crayons and colored pencils.

I created a complex, deep texture, which I wanted to consider for a long time even after the metaphor inherent in the poster image was read. The poster of the twentieth century bewitched the world with its clear, unambiguous images.

In Maistrovsky's works, the world again began to appear before the viewer's eye as an inexhaustible mystery. Maistrovsky's posters for the best films of Russian and world cinematography, made in the late 80s at Reklamfilm, opened a new approach to film posters, which did not illustrate or even interpret the content of the film, but was an independent work of authorship creating its own self-valuable artistic world. In Reklamfilm, a circle of like-minded people formed around Maistrovsky, which became the famous Perestroika "Platskart". All the passion, all the creative discoveries and plastic achievements of the film poster were transformed here into the freedom and power of the "perestroika poster". The work of the "Plazkart" made its highest fame in the last two or three years of the eighties and the first year or two of the nineties. We can say with confidence that the style of the film poster of the period of "Perestroika" was most vividly expressed in the works of I. Without resorting to the pictorial line of the film, I. Maistrovsky finds many-capacious associative and metaphorical images of A.

Tarkovsky's films - "Sacrifice" with a frightening image of the universal Emptiness "Nostalgia" with an original plastic motive of a memorial candle, commenting with equal skill on the film works of perestroika "Repentance and forbidden films of the past ("The Commissioner). The artistic image in the works of these masters is complex, the allegory is encrypted, designed for the artistic culture of the viewer: in the figurative fabric of his posters I. Maistrovsky includes fragments of masterpieces of world culture for example, S. Original title on the poster. Mention details and specifications that you believe are relevant to your buyers.

In 1973 he graduated from the Moscow Higher School of Industrial Art (formerly the Stroganov School) with a degree in Artistic Ceramics. The second prize of the International Olympic Poster Competition in 1980 gave impetus to the work in the poster genre.

Several years of fruitful work in the circus poster followed, and during this period the individual style and technique of Alexander Chantsev gradually developed. In 1989 he was admitted to the Union of Artists. The film posters brought the artist international fame. Solo exhibitions of film posters by Alexander Chantsev took place in Rome in 1991 (together with Yuri Boxer) as part of the exhibition of Soviet film posters, which was held in the largest exhibition hall of the city - Palazzo delle Esposizioni. In 2001, an exhibition of movie posters by Chantsev, Boxer and Maistrovsky was held in the city of Tavira (Portugal).

Alexander Chantsev took part in the largest exhibitions of Soviet and Russian posters, regularly participated in international biennials in Warsaw, Lahti, Colorado, Brno, took part in a poster exhibition in the Louvre (1989), the International Poster Festival in Chaumont, France (1991), in the exhibitions " Russian social poster "in the USA (1991-92), Perestroika. Glasnost in Japan (1991-92), was awarded with diplomas of various competitions, a diploma of the finalist of the European competition of advertising EPICA in Paris (1992). Exhibitions of posters, in which Alexander Chantsev participated, have traveled almost all over the world, the originals and prints have ended up in the most famous galleries and in private collections in the USA, France, Switzerland, Belgium, and the Czech Republic. However, the rise of poster art, which took place thanks to perestroika and the resulting freedom, gradually ended, and interest in the poster was largely lost.

New times have come when the emerging market relations have made completely different demands on artists. I had to master new genres - advertising booklets, annual reports, logos, corporate styles - and face a different customer.

For the last seven years of his life, Alexander Chantsev was engaged in the design of exhibition stands, working as the art director of the Expoline company. It was a new business, and gradually the festive atmosphere of the exhibitions captured Alexander Chantsev entirely. Possessing tremendous efficiency and real professionalism, he managed to create many interesting exhibition stands for such companies as Lucent Technologies, Avaya, Alcatel, A&T Trade, KRKA, Shreya, Orimi Trade, Sunway, Mobile TeleSystems.

Nevertheless, in Russia and the world, Alexander Chantsev is known primarily as a brilliant poster artist who belonged to a remarkable generation of artists. And the soft, good-natured humor of his circus posters, the philosophical metaphors of the movie posters, the sharp, satirical images of political posters will forever remain in our memory. YALTA HOTEL YALTA INTOURIST WELCOMES YOU! Come to us in the USSR! - the meaning of the posters issued by the firm "Intourist" was advertising of tourist trips for foreign citizens beyond the "Iron Curtain".

Yalta Hotel - is still working nowadays under the same name. In: 16x26 - cm: 40x60. This item is in the category "Art\Art Posters".posters" and is located in this country: UA. This item can be shipped worldwide.