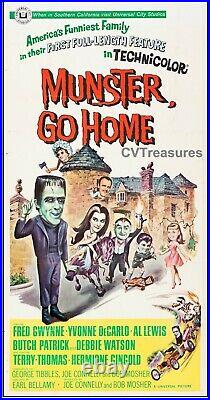 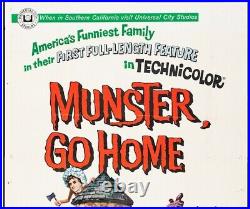 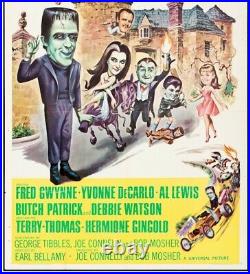 And, while the one sheet appears on the market every now and them this elusive Three Sheet (based on our research) has only surfaced for sale two other times in the past 20 years. Also, although this Three Sheet has similar artwork to the one sheet, the colors and graphics are far superior. This beauty has had no major restoration other then linen backing. Colors are all original bright beautiful unrestored.

This Original gem has amazing bright colors and has been professionally linen backed. NOTE: Even a three sheet in near mint condition shoud be linen backed for several reasons. Three sheets are typically in 2 or 3 pieces/sections and hence highly susceptible to tearing, especially when trying to connect the sections display. Linen backing professionally connects the sections and when laid on linen the naked eye cannot detect the sections. The unattractive fold lines and minor wear and tears are rendered invisible on linen backing.

Linen backing deacifies the acidic vintage poster paper and hence preserves the poster and significantly minimizes the poster from getting brittle. The three sheet, once linen backed, can be easily rolled and stored, without the risk of tearing that is likely when the poster is in sections. The gem has already been linen backed! Munster, Go Home (Universal, 1966). Three Sheet (41" X 79").

The TV show The Munsters, based on the Universal monsters, became so popular that in 1966 the series spun off a feature-length movie. As Herman (Frankenstein's monster), Fred Gwynne discovers he is the heir to Munster Hall in England and takes the whole family on a horrific and hilarious adventure. Conceived initially as a made-for-TV film, Munster, Go Home was the first chance to see this clan of TV ghoulies in full color. The Munsters travel to England and meet up with various British character actors, including Terry-Thomas and Hermione Gingold, while the original Marilyn, Pat Priest, gets replaced by Debbie Watson. Starring Fred Gwynne, Yvonne De Carlo, Al Lewis, Butch Patrick, Debbie Watson, Terry-Thomas, Hermione Gingold, Robert Pine, John Carradine, Bernard Fox, Richard Dawson, Jeanne Arnold, and Maria Lennard. Note: Cvtreasures stamp Not on original. This item is in the category "Entertainment Memorabilia\Movie Memorabilia\Posters\Originals-United States\1960-69". The seller is "cvtreasures" and is located in this country: US.