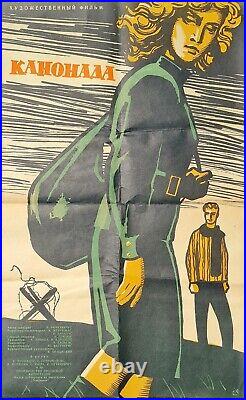 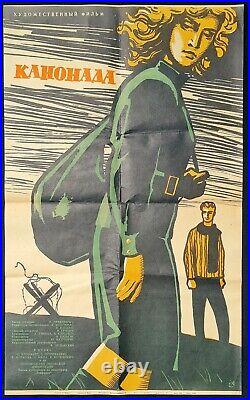 24 February 1964 for the film. "Kanonada" - (literally translates to "Canon"), the 1961 Raimondas Vabalas & Arunas Zhebryunas Lithuanian/Russian military historical melodrama. One of the best military and psychological films of the Baltic cinematography. Please Note: the artwork was issued in a highly limited edition - only 10.000 exemplars, ultra rare, collectable and hard to find Soviet film poster.

The poster was folded with some extra folds and it has a few tiny pinholes around the edges. It is otherwise in generally nice condition. When the Nazis retreated from the village, Stankus's fist disappeared.

But the peasants do not dare to divide the kulak land - the cannonade is still close. And the approach to the lands of the Stankus is mined. Peasant Budris goes to the city "for power". At the beginning of the war, she left with the retreating Red Army and worked in a hospital. Deauville learns that her father was killed by a denunciation by Stancus. Therefore, her meeting with childhood friend Povilaso, the son of Stankus, turned out to be difficult. Povilas did not leave the village with his father. But he is confused, withdrew into himself, does not believe that life can be revived in a burnt village.

Meets Deauville and another friend, Vityanis (Stasis Petronaitis), the son of Budris. Viityanis escaped from the concentration camp. The peasants decide to divide the land themselves. Vityanis is the first to enter the minefield, clearing the approach to the land of Stankus. The first furrow is laid by Laucius.

He invites everyone to the christening of his son in the evening. For the first time during the war years, music and laughter are heard in the village. Lauchus carries his son out into the field. Suddenly, a shot rings out. It was Stankus's fist that avenged him for the land. The peasants chase Stankus, and he is blown up by his own mines. MANUKHIN YAROSLAV NIKOLAEVICH (1925 - 2017) - A prolific movie poster. The son of the artist Nikolai Timofeevich Manukhin, who created photomontage posters at the Reklamfilm factory. Graduated from the Moscow State Art Institute named after V. Works in the field of painting, easel and book graphics, film posters.

Born in Moscow, spent his childhood in the Sokolniki area. He studied at school 370. He was noticed and singled out from a number of talented children by the teacher of drawing and drawing N. After the fourth grade, he continued his studies at a secondary art school known throughout Moscow (director Karenberg).

Upon graduation, he entered the art school named after "Memory of 1905". Graduated from the Moscow State Art Institute.

Surikov, Faculty of Painting, workshop of Professor D. Mochalsky, was a personal scholar.

Since 1953 he taught drawing in graduation classes at the Moscow Secondary Art School. Since 1956, a member of the Union of Artists of the USSR. Among the works are easel engraving (portraits, series on themes of fairy tales, epics, fables), illustrations for children's books, more than 50 titles, movie posters (15 years of work at the Reklamfilm factory), works in the animalistic genre. Participant of all significant exhibitions in our country and abroad, as a graphic artist, poster artist, book illustrator.

Shcheglov recalls: The life of Yaroslav Manukhin is richer and brighter than the parsimonious biographical data. Until now, his fierce temperament pushes him to work tirelessly, to mentor the young, to give joy to others. A critical attitude towards oneself was poured into extremes.

He could take and throw away wonderful sketches and drawings. There were people who took away "trash" from him, which today constituted the "golden fund" of many private collections.

Given to someone, the works surfaced now in Israel, then in Italy... It is a great pleasure to look at his female portraits. One can feel how much depth and tenderness the creator has put into these works. Love for animals is reflected in his animalistic cycles. And then there are landscapes, linocuts. What can we say about the fact that the netsuke, furniture, restoration of icons - all his hands.

Honor and praise to the Russian craftsmen! Not so long ago, Yaroslav Manukhin experienced a spiritual rebirth.

Today, the center of his interests is locked in Orthodoxy. The icons created by him "enter" the houses of his friends and acquaintances. This item is in the category "Art\Art Posters".posters" and is located in this country: US. This item can be shipped worldwide.