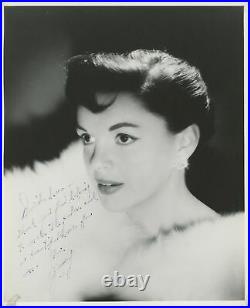 Garland has written in blue ink David dear / thank you for helping to make the palace such a beautiful home for me. Wear to corners, spot of toning to lower left corner, light surface crease to right of image, moderately poor ink adherence, overall in fine condition. 8 x 10 inches 20.3 x 25.4 cm. The Palace Theatre was built in 1913, presenting vaudeville, concerts, and other special events until 1966, when it became home to legitimate musicals and plays. Garland's first appearance there, in 1951, was a massive success; though she was only scheduled to play the Palace for four weeks, she ended up staying for nineteen. The present image appeared on the printed concert programs for her second engagement at the Palace, which opened on September 26th, 1956 and ran for 100 performances.

The inscription is dedicated to David Bines, who provided the scenic and lighting design for Garland's 1951 Palace run and the lighting design for the 1956 return. Garland would return again in 1967, and came to refer to the theatre as her home. " One of the most famous insider spots on Broadway is the hidden staircase located at the back of the house left orchestra section of the Palace, affectionately called the Judy Garland Staircase, " where Garland would smoke a cigarette or two before making her entrance as the audience went wild.

David Bines worked for 22 years as production manager for RKO Theaters, principally at the flagship Palace in New York City. Prior to that, he found work staging dance numbers at New Havens Paramount, Bostons Keith, Providences Fays, and Hartfords State theaters. The great headliners of the day appeared at the Palace, and Bines guided Lauritz Melchior, Betty Hutton, Alan King, Jerry Lewis, Liberace and Harry Belafonte through their appearances there.

His greatest triumph came in the early 1950s when Judy Garland gave one show-stopping performance after another. ALL AUTOGRAPHS GUARANTEED AUTHENTIC WITHOUT LIMIT. Schubertiade Music & Arts are also members in good standing of ABAA/ILAB , the most exclusive consortium of Rare Book and Manuscript Dealers in the world, as well as the MLA (Music Librarian Association), and MARIAB (Massachusetts and Rhode Island Antiquarian Booksellers). SCHUBERTIADE MUSIC & ARTS deals in Music, Entertainment, Literary and other Autographs, Antiquarian Music, Books, Prints, Photographs & Paintings and Ephemera. Please read more about us in our "about me" page by clicking next to our username / feedback listing. And is so stated on the signed and detailed receipt which comes with every item. The item "Judy GARLAND Signed Photograph to the Lighting Designer at the Palace Theatre" is in sale since Wednesday, November 3, 2021. This item is in the category "Entertainment Memorabilia\Autographs-Original\Movies\Photographs". The seller is "schubertiade_music_and_arts" and is located in Brooklyn, New York. This item can be shipped worldwide.