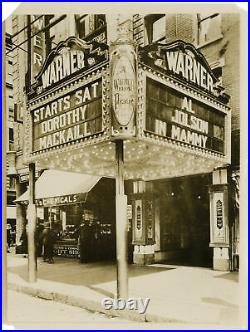 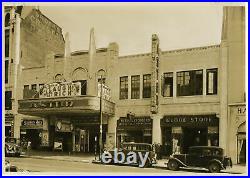 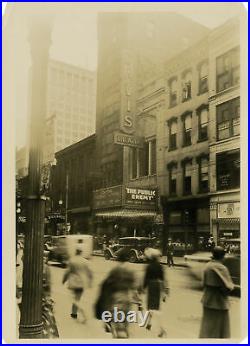 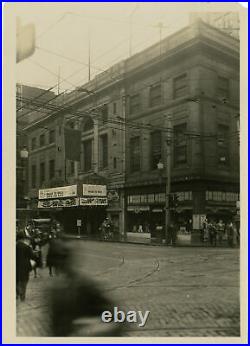 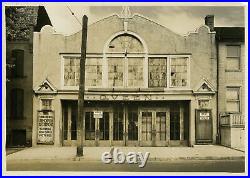 Each with a holograph pencil notation on the verso identifying the theater and city. Three photographs with the photographer's stamp bearing his name and Reading, PA address on the verso. Films by Warner Brothers, Fox, Columbia, Paramount, and RKO are represented in the archive. Seven of photographs have the stamp of photographer Jack Thamm, and feature theaters from Thamm's native Pennsylvania, while the remainder show theaters from as far afield as St.

Louis, MO, Santa Barbara, CA, and Sheboygan, WI. Many of the images show the theaters in the larger context of the places they resided, featuring the street, other shop fronts and signage, pedestrians, and cars. Theaters represented in the archive include Capitol, Shubert, Regent, and Warner theaters, as well as independently owned cinemas.

The penciled annotations on the verso of each photograph are all in the same hand, likely indicating all the photographs were shot by Thamm. In addition to providing striking images of the single screen, art deco influenced movie theaters that dominated American cities and towns between the wars, the archive also provides a window into film exhibition and advertising.

The films showcased on the marquees include well remembered pre-Code film such as "Star Witness, " "The Public Enemy, " and "Mammy, " and stars such as James Cagney, Jean Arthur, and Fay Wray, as well as more time-obscured films and stars such as "Party Husband" (Dorothy Mackaill) and "Laugh and Get Rich" (Dorothy Lee, Edna May Oliver). Finally, a few of the photographs also show the ways theaters attempted entice the movie going public inside, and presumably away from the competition, including showcasing their "perfected Vitaphone and Movietone" sound systems, air conditioning making it "cooler inside, " and, most intriguingly, the Shubert Theater in Pittsburgh advertising "living models" on stage and "for men only" for a Bud Pollard exploitation double feature of "Rio's Road to Hell" (1931) and "Girls for Sale" (1927). Sadly, in a competitive market place brought on by the Great Depression these gimmicks did not always work, and two of images captured closed and boarded up theaters.

After enlisting in WWI, Jack Thamm worked as a reporter and photographer for "The Reading [PA] Times" before launching his own photography business, and working as a police photographer. He reenlisted in the Marines during World War II, and died of a heart attack at 48 shortly after the war.

The item "Jack Thamm ARCHIVE OF 14 ORIGINAL PHOTOGRAPHS OF MOVIE THEATER MARQUEES #137845" is in sale since Wednesday, June 30, 2021. This item is in the category "Books & Magazines\Antiquarian & Collectible". The seller is "vanburenantiques" and is located in Baltimore, Maryland.