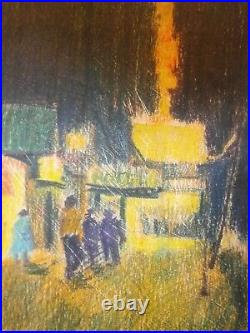 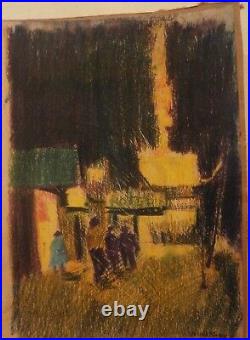 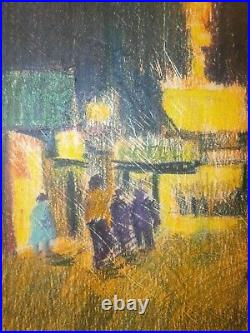 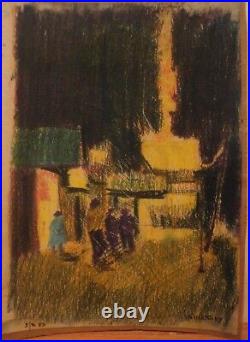 11 by 8 inch modernist, expressionist crayon drawing on paper board of a city street at night (either Newark or New York) showing some people and a hotel and brightly lit movie theater. It was done by listed New Jersey modernist artist Israel Louis Winarsky in 1953.

It is signed and dated. The drawing is in excellent condition. The photos tell the story.

Known to few in his lifetime, Israel Louis Winarsky epitomizes the discovery of a significant Newark, New Jersey artist. Born in Newark in 1930 of Jewish descent, Lou passed his childhood living with his family above his fathers butcher shop first located at 295 and then at 372 Hunterdon Street. His artistic journey began with a gift of crayons, his first childhood memory. He soon became enamored of oils, pastels, watercolors and charcoal.

Winarsky attended the local public schools. Between 1944 and 1947, while working part time as a sign painter, he carried on his education at Weequahic High School. Later in life he spoke often to his family about Brecher whom Winarsky considered a friend. In 1951 he earned a B.

In physics from the University of Chicago and then enlisted in the Air Force, serving some time in Korea as a radioman. In 1961, having painted continuously for over ten years, he traveled around Europe on a motor skooter. In France, Italy and Israel he embraced the people, culture and art and recorded some of his thoughts in letters sent back home to his family. While music and books were part of Winarskys identity, art was his calling. The paintings and drawings of Winarsky reflect emotion, exuberance and insightful character portrayal.

His subject matter ranges from powerful holocaust evocations to jubilant nature and urban interpretations to character explorations. The tragic empathy and gravity that are evident in his Semetic character ensembles are counterbalanced by the uplifting vitality of his colorful landscapes, cityscapes, still lives, and harbor scenes.

Most of his best oil paintings are vibrant expressions of color and form that resonate beauty and probity. Appropo of Winarskys varyingly dynamic, often pure and sometimes quasi-geometric use of color, one could wonder about Oscar Bluemners influence on Winarskys vision. Much of Winarskys work could be viewed stylistically as that of an American Colorist in the modified tradition of Bluemner with whose work and color theories Winarsky probably was familiar. Many of Winarskys landscape paintings fit/pictorially express Bluemners notion. Whatever inner impulse we address towards nature is abstract. Thus, a landscape, as a motive for expression, undergoes a free transformation from objective reality to a subjective realization of personal vision.

Oscar Bluemner: American Colorist, p. 23, Fogg Museum, October 11-November 15, 1967. Moreover, Winarskys frequent use of simplified masses in landscapes reflects the influence of both Marsden Hartley and as well as that of Oscar Bluemner. Combining his preoccupations with World War II history and military aircraft design, Winarsky also painted many watercolors of aerial combat, missions and sorties.

Winarsky was not devoured by the holocaust horror but was indelibly touched by its human lesson. As a result it seems he was emancipated to appreciate the beauty of life and art more not less because of its occurrence. His style was variably expressionist and impressionist with a modernist flair and a representational base that gave his work multiple facets. His palette was zestful, his compositions bold and forthright and oftentimes quite complex. Winarsky, as do most successful artists, has left us with a pictorial range of his interests, attitudes and favorite subject matter in a expressive and effective manner. Appropo of his modernist approach, Winarsky did not try to record the literal but rather sought to transform it. His subject matter, whether it was a still life, a figure or a landscape, was channeled through his transformative sensibilities with an often cogent result. Perhaps his greatest gift was that he was a committed and imaginative colorist whose vision was authentic, personal and accessible. Winarsky had no other non-service residence other than his family home until 1965. He then married Bernice Kurman and moved to Eastern Parkway in Newark before settling permanently three years later at 299 Short Hills Avenue in Springfield, N. A home on a wooded lot that served as a refuge, studio and subject for Winarsky. He supported his wife, his son & his daughter by working in research and development at Squibb/Bristol Meyers.

Despite his more public life in science, privately he was constantly immersed in his lifelong growth as an artist. Winarsky died of a heart attack in his Springfield home in June of 2006, leaving a large inventory of his passion and vision intact. Israel Louis Winarsky should be remembered for his beautiful impressionistic and expressionistic landscapes, his holocaust depictions, his urban portrayals, his colorful still lives, his harbor renderings and his expressionistic character interpretations, all of which secure a place for him among New Jerseys most remarkable 20th century artists. The item "Hotel & Movie Theater at Night In City Crayon Drawing-1953-Israel Louis Winarsky" is in sale since Thursday, January 4, 2018.