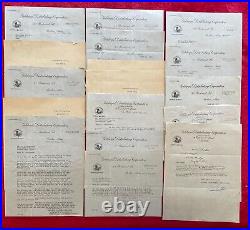 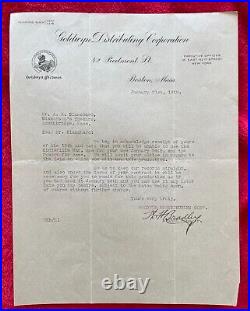 We are offering 18 letters between Goldwyn Distributing Corp. The correspondence is dated from October 19, 1917 through December 2, 1918. 13 of the letters are from Goldwyn Distributing Corp. To Blanchard, on their letterhead, from either the Vice President, Corporate Manager, or Comptroller located at their Executive Offices at 46 East 42nd St. New York; or from Goldwyn's Branch Manager located at their Boston office, which handled some of the correspondence with Blanchard Theatre in Southbridge, Massachusetts.

5 of the letters are from Arthur B. Blanchard (Blanchard Theatre), to Goldwyn Distributing Corp. The first letter, from Goldwyn to Blanchard dated October 19, 1917, is pretty interesting, and although, of course, meant to be serious, it is actually rather comical - regarding the way films were transported from one theatre to another back then, how the film distributers and theatres communicated with one another, and the general way the industry, in its infancy, was run compared to today.

This letter, from Harry F. Campbell, Manager, begins There certainly was the devil to pay today on your feature going from Southbridge. I telephoned your theatre for three hours this morning, but could get no response. I called the express agent, and also tried to get your home by messenger.

I feel that you, of course, instructed the boy properly, but his negligence cost us this amount and I believe he should be made to settle. In another letter from Blanchard. Blanchard writes This house is doing big business but playing your pictures at the price we are paying you for 10 cent admission, we have gone in the hole every time..... Says Goldwyn had sent films which he had cancelled, and now he was being forced to play them at a loss. In a letter from Alfred Weiss, Vice President of Goldwyn Distributing Corp.

He says the contract does not provide for cancellation by either party. He also disagrees with Blanchard's claim that had cancelled the film " Cinderella Man", saying he did not follow the rules of the cancellation clauses in their contract. There always seems to be confusion, disagreement and contention between the two parties. It must have been crazy!! CONDITION: The letters from Goldwyn are Excellent, with normal fold lines.

3 of the Blanchard letters, which are on more fragile paper, have a little bit of edge chipping. This item is in the category "Entertainment Memorabilia\Movie Memorabilia\Other Movie Memorabilia". The seller is "propicker" and is located in this country: US.