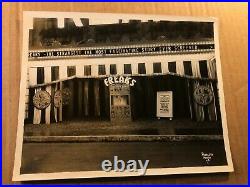 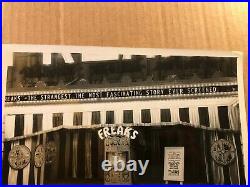 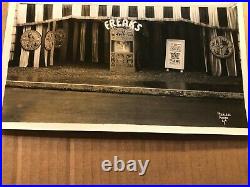 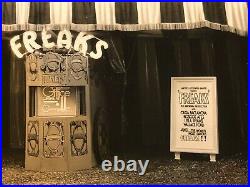 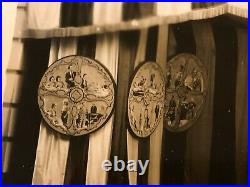 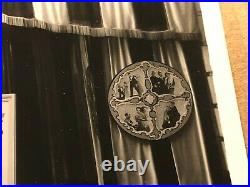 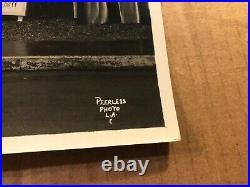 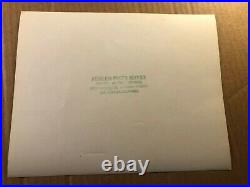 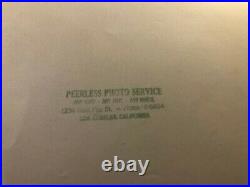 Here is an extremely rare early vintage original 1932 8" by 10" photo of a movie theater marquee for the 1932 cult classic Freaks. Photo from Peerless Photo Service, which online searches indicate only existed in the early and mid-1930s. Peerless seemed to specialize in photos of movie theater marquees showing current movies. Please see my other current listing for an original 1930s Peerless Freaks photo s.

An extremely rare photo from one of the most famous and disturbing movies ever made. Freaks (also re-released as Forbidden Love and Natures Mistakes), is a 1932 American pre-Code horror film produced and directed by Tod Browning, and starring Wallace Ford, Leila Hyams, Olga Baclanova and Roscoe Ates. It follows a trapeze artist who joins a group of carnival sideshow performers with a plan to seduce and murder a dwarf in the troupe to gain his inheritance, but her plot proves to have dangerous consequences. The film is based on elements from the short story "Spurs" by Tod Robbins. Filmed in Los Angeles in the fall of 1931, some employees at MGM were uneased by the presence of the actors portraying the "freaks" on set, and, other than the so-called more normal looking "freaks", the Siamese twins and the Earles, the performers were not allowed to be on the studio lot, relegated instead to a specially-built tent. The film had test screenings in January 1932, with many of the audience response being harsh, finding the film as too grotesque. In response to this, MGM executive Irving Thalberg, without consent of director Browning, edited the original 90-minute feature, which was significantly cut, with additional alternate footage incorporated to help increase the running time. The final abridged cut of the film, released in February 1932, was 64 minutes; the original version no longer exists. However the film was shown it its original entireity when it made its world premier at the Fox Theatre in San Diego, California, which advertised it was the only venue where the film could be seen in its original entirety, where it had a successful in-house run. Despite the cuts made to the film, Freaks still garnered notice for the portrayal of its eponymous characters by people who worked as sideshow performers and had real disabilities. These cast members included dwarf siblings Harry and Daisy Earles; Johnny Eck, who had sacral agenenis; the conjoined twin sisters Daisy and Violet Hilton; and Schlitzie, a man with microcephaly. Because of its controversial content, the film was banned in the United Kingdom for over 30 years, and was labelled as "brutal and grotesque" in Canada. Though it received critical backlash and was a box-office failure upon initial release, Freaks was subject to public and critical reappraisal in the 1960s, as a long forgotten Hollywood classic, particularly in Europe, and was screened at the 1962 Venice Film Festival. In retrospect, numerous film critics have suggested that the film presents a starkly sympathetic portrait of its sideshow characters rather than an exploitative one, with Andrew Sarris declaring Freaks one of the "most compassionate" films ever made.

Nonetheless, critics have continued to take note of the film's horror elements; in 2009, Joe Morgenstern proclaimed that Freaks contains some of the most terrifying scenes in film history. Film scholars have interpreted the film as a metaphor for class conflict, reflecting the Great Depression, and it has been studied for its portrayal of people with disabilities, with theorists arguing that it presents an anti-eugenics message. The film has been highly influential, now considered a cult classic that it was selected for preservation by the United States National Film Registry, in 1994 which seeks to preserves films that are classified "culturally, historically, or aesthetically significant". The item "Freaks Extremely Rare Original 1932 Photo Of Movie Theater Marquee For Freaks" is in sale since Sunday, May 9, 2021.

This item is in the category "Entertainment Memorabilia\Movie Memorabilia\Photographs\Pre-1940\Black & White". The seller is "pengang" and is located in Marietta, Georgia. This item can be shipped worldwide.