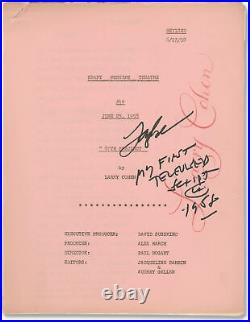 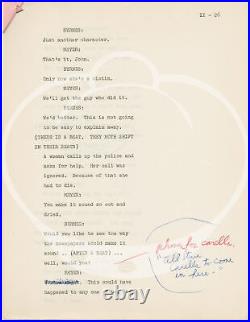 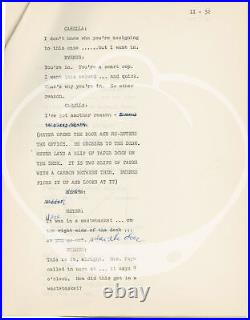 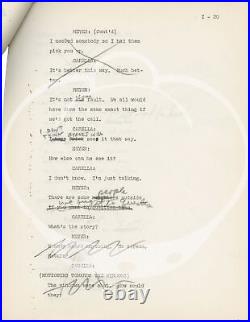 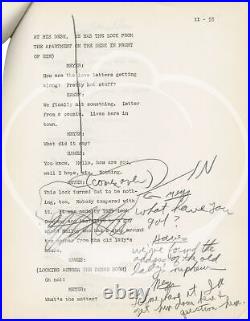 Each script signed by screenwriter Larry Cohen, and three scripts with holograph pencil and ink annotations by Cohen throughout, noting deletions and substantive revisions. "Kraft Theatre" was a dramatic anthology television series which aired on NBC from 1947 to 1958.

In this installment, loosely based on Ed McBain's "87th Precinct" novel series, a solitary widow whose frequent calls to the police to report a burglar are usually ignored turns up dead in her apartment. An early venture for screenwriter Larry Cohen, who would go on to write blaxploitation films "Bone" (1972), "Black Caesar" (1973), and "Hell Up in Harlem" (1973), as well as several popular horror and science fiction films, including "It's Alive" (1974), "God Told Me To" (1976), and "The Stuff" (1985). Set and shot on location in New York. Act I Revised Script, with pencil annotation on the front wrapper: Self wrappers. Title page present, noted as REVISED, dated 6/17/58, with credits for screenwriter Larry Cohen.

Title page integral with the front wrapper. 30 leaves, with last page of text numbered I-24. Pages Very Good plus, with the last leaf detached from the binding, partially bound with a single staple to the top left corner. Act II Revised Script: Self wrappers.

43 leaves, with last page of text numbered II-68. Pages Near Fine, partially bound with a single staple to the top left corner.

Revised complete script: Lacking and title page, possibly as issued. 94 leaves, with last page of text numbered III-87. Subject: Archives, Film Scripts, Mystery and Crime, New York, Police Procedural, Screenwriters, Television, Television Scripts. Royal Books is located in the midtown area of Baltimore, Maryland. Since 1996, we have specialized in rare books and paper relating to twentieth century literature, genre fiction, the arts, and popular culture, with a particular emphasis on cinema. All books noted as First Editions are also First Printings unless indicated otherwise. This listing was created by Bibliopolis. This item is in the category "Entertainment Memorabilia\Movie Memorabilia\Scripts\Originals\Unsigned". The seller is "vanburenantiques" and is located in this country: US.