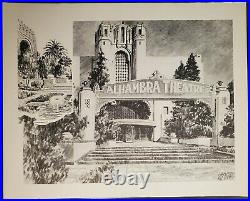 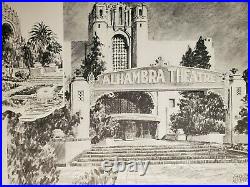 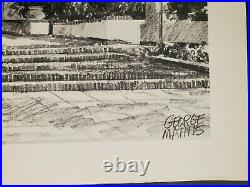 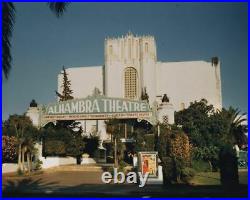 Movie Theatre By George Mathis 1950s Rare Print #2. In twenty five years of collecting this is the first time I have come across this image by George Mathis.

George often found himself just one step ahead of the bulldozer. The tendency at the time was to tear down historic buildings and replace them with modern structures. The Alhambra Theatre opened in 1927 and was the preeminent movie house in the greater Sacramento area for many years. By the Granada Company with c. Founded by banker George Peltier.

The theatre was in the image of the famous Alhambra Castle in Granada, Spain, which was known for its Moorish architecture and lush gardens, courtyard and fountain -- complete with reflecting pools. The interior was lavishly appointed with red carpet, gold trim, and large pillars beneath a domed ceiling about 100 feet overhead.

Chandeliers and ornate gold walls oozed glitz. Balcony seating and a cutting-edge sound system completed a more than memorable audience experience. The Alhambra, which also was designed for live entertainment, featured an orchestra pit, theatrical stage, dressing rooms and an organ with pipes that were part of the showplaces very bones. It was located directly beyond the eastern terminus of K Street at 1025 Thirty-First Street in the East Sacramento neighborhood. Moviegoers once entered this theatre, known as the Showplace of Sacramento, through a beautiful garden with fountains.

So great was its splendor that the City of Sacramento even renamed adjacent 31st Street Alhambra Boulevard in honor of the theatre. He Alhambras grand opening was September 24, 1927 were Hollywood starlets sang and danced before the showing of A Night in Spain on the theatres silver screen.

On hand for the festivities was California Gov. Clement Calhoun Young, who delivered a speech.

And, the Alhambra Symphonic Orchestra performed three Spanish-themed pieces composed for the occasion. The Alhambra theatre was designed by Starks and Flanders, a firm which was founded in Sacramento by New Yorker Leonard Starks in 1922 the firm designed many other important structures, including the Fox-Senator Theater, the Elks Building, C. McClatchy High School, and the downtown post office. The theater was also home to the Alhambra Pipe Organ, an organ of fifteen ranks built by the Robert Morton Organ Company in 1927. The Alhambra Theatre was closed September 4, 1972 with A Man For All Seasons and Nicholas and Alexandra.

The destruction of the theatre, which was opposed by the public, awakened a preservation movement in Sacramento that remains active today and has adopted Remember the Alhambra as a slogan. Today, the only remnant of the Alhambra Theatre is a one story fountain and a plaque located on the side of the Safeways parking lot. They tore down paradise and put up a parking lot. Sheet size, 17 3/4" X 22" Image Size, 14 3/4 X 19 1/2. George's love affair with mountains was enhanced when he moved to Nevada City.

Young American Mine on Sardine Lake which only offered exciting remnants of history but the majestic Sierras were the back drop- a place to recapture the aura of the fabulous gold rush era. Old Kentucky Mine, on the out skirts of Sierra City, is now a museum but when George was there over 70 years ago Sierra City boosted two bars and one old time hotel. Yuba River County could be any spot along a mountain river but this abandoned mine shaft is just south of Downieville. Settlements mushroomed near any gold strike-some lived and grew but most faded into history. Alleghany, still just a wide spot off a cliff-side road, was the scene of great expectations in the 1850's.

From an old Friday House Gallery Brochure. About the Prints, Theres always a bit of confusion concerning the manner in which a two-dimensional piece of art is reproduced. The term print can be correct when used with serigraphy, etching, lithography or offset reproduction.

The prints at Friday House Gallery are offset reproductions from an original pencil sketch and are reproduced in an unlimited number most often. An original pencil sketch on paper or illustration board is photographed on a process camera, producing a negative from which the plate is made. That plate goes on our offset printing press and multiple prints are made whenever needed. The way you can tell the difference between and offset reproduction and a true lithograph, serigraph, etching, etc, is to look at the piece under magnification if there is a mechanical dot pattern (like the photos in a newspaper) it is an offset reproduction in all common cases.

Many reproductions today are touted as lithographs when in reality they are offset reproductions. Our prints are printed by the family in the gallerys workshop.

They are printed in black ink on white paper. These are then titled and signed in pencil (a studio signature) to extend the artists touch. About the original pencil sketches, George Mathis created more than 200 pencil sketches focusing on California past. George Mathis Pictorial Historian of the Mother Lode.

George Mathis was generally and affectionately known as the pictorial historian of the Mother lode. Because of his interest in the history of the Gold County area, his desire to be authentic and his exceptional talent, the title was well deserved.

Pictorial illustrations became his greatest talent and reflected in his original lithographs and prints from his original pencil sketches. The proofs from the original lithographs were from stone presses but were engraved at the site on a stone substitute. The Miners cabin a favorite subject delighting children and adults. On a Sunday afternoon in the artists studio, George would sketch one of these for visitor, telling a story while he drew a miners cabin a white cat in the doorway waiting for his master, smoke coming from the chimney because there were beans cooking on the back of the stove, a nest of birds, and a few clumps of granite.

The sketch took just minute and then was presented to the youngest member of the family. It was not unusual to receive a childs version of a miners cabin sketch as a return gift. The cabin sketch was developed to show how the technique worked.

George made it look easy. About the Water Colors: Spokane, Washington is the birthplace of Jean Mathis. She became a Californian later at the age of 19 where her talent for marionette construction and theater led her to conducting classes at one of Oaklands department stores. Jean attended art school part time and here a romance with fellow art student, George Mathis, developed. Jean and George married in 1963-a marriage that resulted in a bipartisan art and craft-continuing through the years.

Jean has a deft touch for many activities. She was once a linotypes and columnist for a newspaper, designed domestic architecture, and one of her doll designs won national recognition in McCalls Magazine. Theres a special gift for dried flower arrangements, ceramic modeling and costume design. Watercolor excellence was accomplishment developed to compliment her husbands historical illustrations.

These watercolored subjects have become one of the wests most popular records of western history. The heritage is Currier and Ives but George/Jeans Mathis results are a dimension of their own for collector or history fan. Author Note: On some prints one might see in the lower right corner the writing W/C, J.

This means that Jean Mathis handcolored that print. Sketching The Mines: Georges love affair with mountains was enhanced when he moved to Nevada City.

Young American Mine on Sardine Lake only offered exciting remnants of history but the majestic Sierras were the back drop- a place to recapture the aura of the fabulous gold rush era. Old Kentucky Mine, on the skirts of Sierra City, is now a museum but when George was there [50] years ago Sierra City boosted two bars and one old time hotel.

Now it has been discovered. Alleghany, still just a wide spot off a cliff-side road, was the scene of great expectations in the 1850s. The Empire Mine in Grass Valley and Otts Assay Office in Nevada City were among the first subjects for Georges sketch pad. It was after he moved to Coloma that he discovered the stamp mill site of Ruck a Chucky Mine and noted sadly that some time would demolish one of the last visual reminders of this once famous territory north of Georgetown.

La Compton Mine in Nevada City, Last Mine on Main Street and Chinese at the Mines were researched and sketched from old photographs and engravings. Sketching in the Foothills: Historians record the excitement of the gold rush days but mostly he remembered the mountains and the foothills were these events took place.

It was early in June when George sketched the Sierra Buttes for Bassetts Station background was the snow still topping these lovely peaks. Thirty years ago when visiting Bridgeport Bridge there was not a person in sight. Not one car went by while George sketched. In 1952 the road to Bodie left much to be desired. Bodie had yet to become a tourist attraction. Just a blowing wind broke the silence of this ghost town. Carol and George climbed about the cliffs above Donner Lake to locate the trail where the covered wagons come over the pass. Sketching the Railroads: Most of the historic trains that George sketched were researched from old photographs; Jean remembers a trip they took to a lonesome spot in the Nevada desert where the Virginia &Truckee bullion car sat on a barren hilltop. In 1952 they went to Sierra Valley to sketch the Shay and caboose nestling in the fringe of grass.

(Print is Abandoned Rail Equipment 1952) Georges attention to detail is reflected in his statement, If I dont put in every nut and bolt, some train buff will surely point out the omission. The Historical, Old Buildings: It was around 1945 when George began sketching the gold country. As they traveled the foothills, a feeling of urgency grew-a need to record as many old buildings as possible before time, weather and the march of progress destroyed these places.

The tendency at the time was to tear down and replace them with modern structures. Certainly too many historic buildings suffered this fate. When they went to Sierra City, years ago, the town consisted of boarded up buildings, two bars and one hotel. Now it thrives as a popular vacation resort. Old Kentucky Mine stood decaying for years.

It has now been turned into a museum with plans to make it a working museum to demonstrate the processing of ore. The lawless atmosphere of the gold rush days may be missing but the flavor of the 1800s is still there.

Nevada City is one of the best examples of careful restoration. The National Hotel, Otts Assay Office, American Victorian Museum, The Marsh House and many fine Victorian homes are just a few of the places well worth mentioning. Old structures now in the gold country cities, towns and state parks are restored or in the process of restoration. SOURCE: A Catalogue of George Mathis Country offering over 100 prints & lithographs of the historic west 1980s. The item "East Sacramento Alhambra Movie Theatre By George Mathis 1950s Rare Print #2" is in sale since Monday, December 28, 2020.

This item is in the category "Art\Art Prints". The seller is "bahama42" and is located in Sacramento, California.