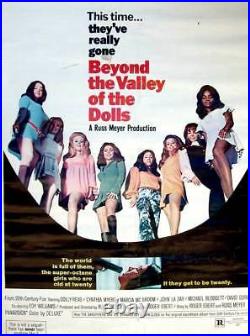 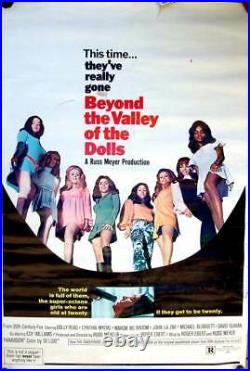 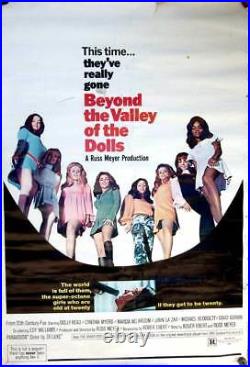 Originally intended as a sequel to the 1967 film Valley of the Dolls"dolls" being a slang term for depressant pills or "downers"Beyond the Valley of the Dolls was instead revised as a parody of the commercially successful but critically reviled original. The movie was a Russ Meyer Production from 1970. This sign / poster came from a movie theater in Culver City, Calif. It measures a huge 40' X 60 and displays really well.

Still, it does show wear. There is one tear along the top edge (just off center). They run down roughly 3.

There is a "roundish" tear in-circling part of the "N" in "Gone" and the blackish smudge below. There is also some crinkling in the black right area, as well as in the face that the gun is pointing at. Several pin-holes one the edges.

Beyond the Valley of the Dolls was a satriical musical melodrama film starring Dolly Read, Cynthia Myers, Marcia McBroom, Phyllis Davis, John LaZar, Michael Blodgett, and David Gurian. The film was directed by Russ Meyer and co-written by Meyer and Roger Ebert.

The item "BEYOND The VALLEY of the DOLLS -1970 MOVIE / THEATER POSTER / SIGN Russ Meyer" is in sale since Saturday, April 20, 2019. This item is in the category "Entertainment Memorabilia\Movie Memorabilia\Posters\Originals-United States\1970-79". The seller is "uconsignonline" and is located in Santa Monica, California. This item can be shipped worldwide.