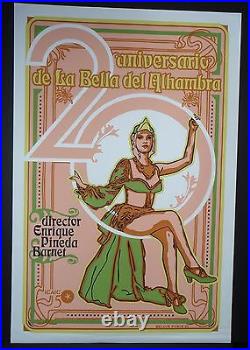 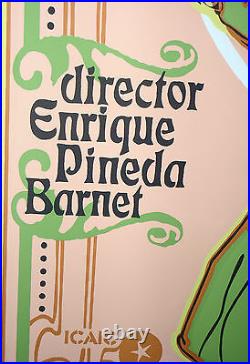 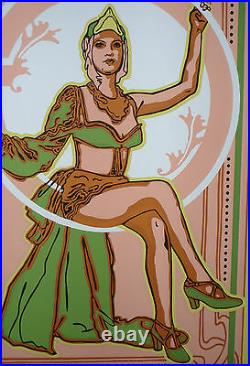 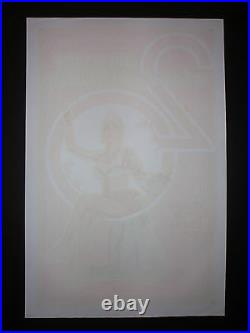 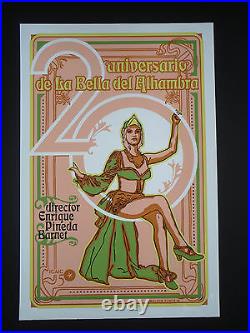 Is offering a huge selection of handmade Cuban silk-screen movie posters, many of which work beautifully well together. To view all of the posters, please visit our. The Cuban Poster Gallery appreciates your business! See below for a description of the movie.

The poster, which Ponce hand-signed in our presence, was made. In the ICAIC (Cuban Film Institute) silk-screen workshop in Havana. Ondition of this poster is good; as with many Cuban movie posters, please note that you might find some slight ripples or wrinkles in the white border around the images and small imperfections elsewhere because these posters are, after all, handmade. Synopsis of La Bella del Alhambra.

Rachel works as a chorister in a marquee where she believes being a prostitute is her only way out. But Rachel dreams of another life in which she is loved by a man and respected as a true artist. Her objective is to perform at the Alhambra Theater, a peculiar place just for men.

A few words about collecting Cuba's silk-screen movie posters. For more than 50 years, the. Cuban Film Institute has been designing silk-screened posters for most every movie shown on the island, whether the films originated in Cuba, the United States, Brazil, Japan or Italy. In the midst of the Cold War 1960s and 1970s, many of the subtitled foreign films shown in Cuba came from the island nation's communist allies in the Soviet Union, Eastern Europe, Vietnam and even North Korea.

Unlike in the United States, where movie posters are often dominated by images of Hollywood stars, the Cubans assign a graphic artist to design an original piece of artwork for each film. These posters are widely recognized in graphic design circles. As stylish works of art, handmade one color at a time and often under difficult circumstances at various times, paint and even paper have been in short supply on the island.

Cuba's silk-screen movie posters are nothing less than museum pieces. Examples of Cuban poster art can be found in the permanent collections of museums across the globe from the Victoria & Albert in London to the Museum of Modern Art in New York, as well as in prestigious institutions such as the Library of Congress in Washington D. And the Academy of Motion Picture Arts and Sciences in Los Angeles. Adding to their collectibility, Cuba's movie posters are produced in relatively small numbers.

Typically, a few hundred copies are made for each film, although the runs have been as low as 50. Responding to demand from collectors, the Cuban Film Institute has re-screened some of its more popular posters. That's why some posters created in the 1960s and 1970s began reappearing on the Caribbean island in the 1990s and 2000s.

Further adding to their collectibility, many of Cuba's vintage posters are imperiled. To us, these survivors are rare beauties, even those with obvious flaws. We are proud to have rescued hundreds of posters from almost certain extinction by storing them in an air conditioned, acid-free environment.

We consider both to be collectible, and (in response to a question we often get) all of these posters were legally imported because the U. Government exempts artwork from its economic embargo against Cuba. While the pricier originals are favored by some collectors, the re-screens are also collectible because they were made in the same Havana workshop as the originals. Note that we never sell unauthorized reproductions that have been cranked out in print shops in the U. The item "BEAUTY OF ALHAMBRA / Hand-Signed CUBAN Silkscreen Movie Poster CUBA ART by PONCE" is in sale since Friday, March 29, 2019. This item is in the category "Art\Art Posters".

The seller is "cubanpostergallery" and is located in Washington, District Of Columbia. This item can be shipped worldwide.