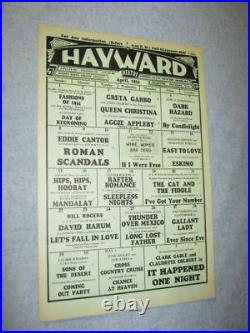 Be sure to add me to your favorites list. ORIGINAL LEGENDARY HAYWARD THEATRE CALENDAR MAILER, HAYWARD CALIFORNIA, SOME OF THE CALENDARS HAVE PENCIL CORRECTIONS AND NOTES THAT LEAD ME TO BELIEVE THEY CAME FROM THE PRINTER'S PERSONAL COLLECTION. During the early years, it showed silent films and had vaudeville acts on Sunday evenings. This theater was once considered "the entertainment center of Hayward" and was located in downtown Hayward on Mission Blvd near A St.

In the early 1970's, it, along with the Ritz Theater up the street, had suffered from declining attendance due to a (then) declining downtown and multiplex theaters built in the western part of Hayward. After an attempt at being a discount house, the Hayward switched to porn in April 1973. The Ritz would follow the same route less than 6 months later. The Hayward Theater was destroyed by fire in June 1976 and on its site now rests a parking lot for a new Alberson's supermarket as part of a revitalized downtown Hayward. NO PRINTER IS LISTED, HOWEVER, A UNION STAMP IS ON THE TOP RIGHT.

CHANCE AT HEAVEN GINGER ROGERS. IT HAPPENED ONE NIGHT CLARK GABLE CLAUDETTE COLBERT. VERY UNIQUE POSTER, THE DIFFERENT MOVIES THAT ARE SHOWING TOGETHER, THE ADMISSION PRICES. MANY TITLES ARE IN THE HUNDREDS AND THOUSANDS OF DOLLARS FOR THE 1 SHEET AND OTHER ITEMS FOR THE MOVIE.

9 1/4" X 14", 4 ply cardstock, no pin holes. No tape, very nice condition, the paper is very strong not brittle, photo is pretty accurate, but more clear than the picture I took. It has taken me over 100 hours to add it to all my items.

They will not tell me why it needs to be added. If you have more questions about this item, please contact me at the following. This item is in the category "Entertainment Memorabilia\Movie Memorabilia\Posters\Originals-United States\Pre-1940".

The seller is "kidrokmod" and is located in this country: US. This item can be shipped worldwide.