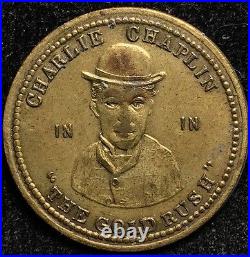 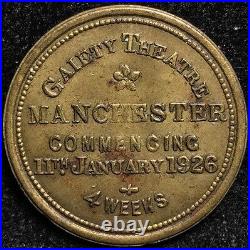 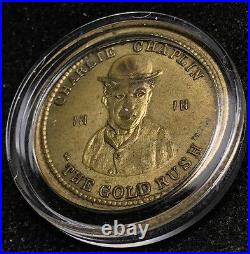 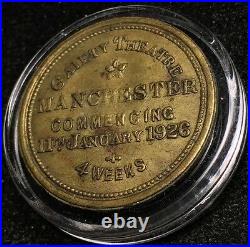 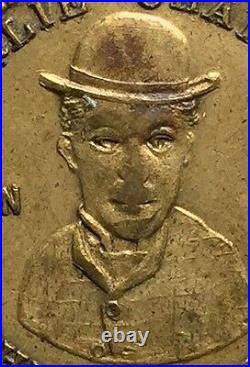 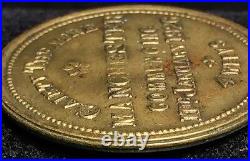 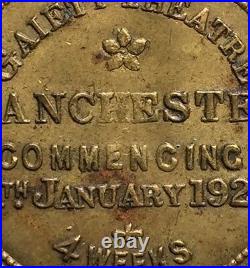 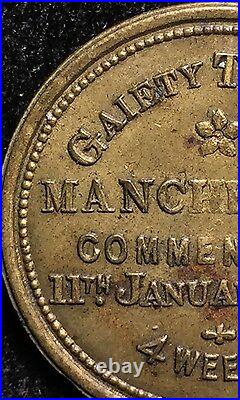 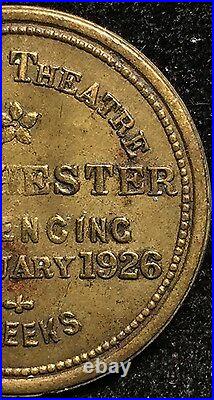 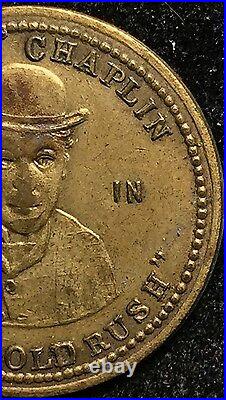 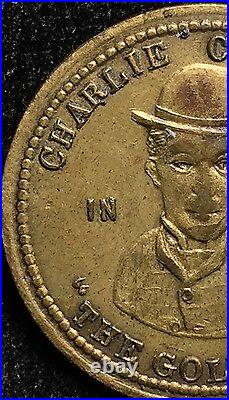 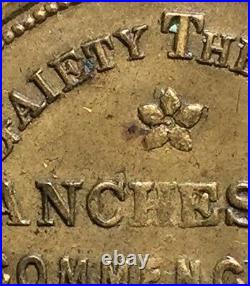 In 1926 publicists, in an attempt to alert the public to the release of the latest Charlie Chaplin film "The Gold Rush", threw these promotional brass token into the streets, which the public scrambled to claim. The first time this occured was in Manchester, England, where the publicity stunt ended up stopping traffic and led to the promoters being fined. Despite this, the same method of advertising was repeated in many other towns and cities including Sunderland which culminated in the film being such a huge box office hit. This theatre token was advertising the Charlie Chaplin movie "The Gold Rush".

Face Token Coin Info: Gaiety Theatre, Manchester commencing 11th January 1926 for 4 weeks. The reverse : Charlie Chaplin's in in The Gold Rush. Film actor and director, most famous for his silent films with slapstick comedy in American cinema. The Gaiety Theatre, in Peter Street, Manchester was built by Alfred Darbyshire for United Theatres Co Ltd with John Hart as the licensee, and originally opened as the Comedy Theatre in 1884, with a capacity of 2,500. The stage was 27' deep by 31' 6" wide, with a proscenium height of 25' and a further 24' 6" to the grid. The Theatre was fitted with an orchestra pit. The auditorium of the Gaiety Theatre, Manchester - Courtesy The Theatres Trust. For many years the Comedy Theatre was run by John Pitt Hardacre who began his theatrical career at the Queen's Theatre, Manchester in 1876 under the stage name of Stanley Ward.

There is more on John Pitt Hardacre below. The Comedy Theatre was later renamed the Gaiety Theatre and would be bought by Miss A. Horniman took possession of the Theatre on the 8th of April that year and ran it for the Spring season but she would later have the Theatre reconstructed by the renowned Theatre architect Frank Matcham. The Theatre closed in June 1908 for the three month reconstruction and reopened as the Gaiety Theatre on Monday the 7th of September 1908 with a production of a new Comedy by Charles McEroy called'When the Devil was Ill'. We warrantee and represent that the goods are as described in the above listing. We specifically disclaim any implied warranties of title, merchantability, fitness for a particular purpose and non-infringement. Customers should satisfy themselves that any item choice made is suitable for their intended purpose or use. We pride ourselves on our customer service. You may also be interested in.... The item "1926 Charlie Chaplin Silent Movie Historic Scarce Token Theater Gold Rush Coin" is in sale since Saturday, April 8, 2017. This item is in the category "Entertainment Memorabilia\Theater Memorabilia\Playbills\Pre-1940". The seller is "worldclassplayingcards" and is located in Slippery Rock, Pennsylvania. This item can be shipped worldwide.